"Game capture is serious business in South Africa ... Animals are bred for a range of purposes: for conservation, for hunting, and for sale to other game reserves. They are captured on both state-owned and private land. Sales from game auctions in the country last year amounted to 93.5 million rand (US$15.30 million) compared with about 101.3 million rand in 2004, according to one estimate ..... "

The only way modern man measures the value of something is in rands and cents. I can't believe these ... stupid, stupid, stupid human beings who think animals are stock to be traded on markets, objects to be used and abused as we wish, to boost the god of economy, to bring in dirty money.

"We know that the white man does not understand our ways. One portion of the land is the same to him as the next, for he is a stranger who comes in the night and takes from the land whatever he needs. The earth is not his brother, but his enemy - and when he has conquered it, he moves on. He leaves his fathers' graves, and his children’s birthright is forgotten." - Chief Seattle

"When the buffalo are all slaughtered, the wild horses all tamed, the secret corners of the forest heavy with the scent of many men, and the view of the ripe hills blotted by talking wires, where is the thicket? Where is the eagle? Gone." - Chief Seattle

Posted by Kim at 09:40 No comments: Links to this post

Slime moulds are neither plants nor animals and yet they are both.

I have been thinking a lot lately about interspecies communication after attending a workshop on this exciting theme. Naturally occuring humananimal hybrids (ie where the souls of both parties mutually agree on an equal basis to join forces for a period of time) have been prominent. But permanent, interspecies hybrids where two very different species merge are less obvious. There are the chimeras of ancient myth. But slime moulds live here and now in our very presence and cannot be discounted by the god of science.

The bushmen of course are the masters of therianthropy, respectfully assuming the characteristics and physical stance of an animal. They may use this technique in order to hunt an animal or they may simply be asking the animal's permission to move through its territory.

Check out the pics on the link, they are amazing.
Posted by Kim at 13:59 No comments: Links to this post

And the hunter becomes the hunted 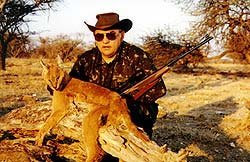 Some posts don't require many words. Just look at this picture. It churns my stomach. But the tables are turning. The species-traitors will soon join forces with the animals and others to stop this disrespectful slaughter.

I did a google image search for the word "Rooikat". I was looking for a picture of a Rooikat or Caracal to remind myself of how beautiful these animals are. Sadly my first 20 results were images of an army tank designed under the apartheid government. The remaining three, one of which is pictured on this page were:

Imagine if my young child was doing an ecology project for school and did this search. What kind of world are we living in?
Posted by Kim at 21:33 No comments: Links to this post

Life expectancy for Zim women lowest in the world

Life expectancy for women in Zimbabwe has plummeted to just 34 years, by far the lowest in the world according to data released on Friday by the World Health Organisation. Women in the Southern African nation and in nearby Swaziland are the only ones in the world who are not expected to live into their forties.
Posted by Kim at 12:03 No comments: Links to this post