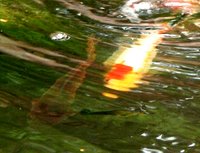 The three largest water corporations will control 70 percent of the water in Europe and North America by the end of the decade. And these same corporations, along with the ubiquitous world bank, are slowly seeping into the other continents too!

I heard that dams are changing earth's axis by redistributing water, not sure it this is true yet, will see what I can find. Sounds feasible when you start looking at the stats for the size of projects such as the Three Gorges Dam in China.
Posted by Kim at 12:40 No comments:

Mountain top removal, under the ocean

The UN's attempt to ban ocean-bottom trawling has failed. Unlike mountain top removal above ground (see the satellite images on google earth), the undersea version is invisible to most of us as it takes place out on the high seas and in deep water. Out of sight out of mind as the saying goes!

But it's no less destructive and is playing a huge role in killing the oceans.

My message to you today, all the millions who read this blog, is stop eating fish unless you caught it yourself with a hook from the side of a dam, river or or from a rock along the coastline.
Posted by Kim at 09:05 No comments:

90% of cluster bomb victims are civilians

Every year, countless children and adults are killed and maimed as a result of the ongoing use of cluster bombs. Join the petition to ban cluster bombs. Seymore ...
Posted by Kim at 15:08 No comments:

Israeli Cabinet Minister Jacob Edery has admitted that Israel used controversial phosphorus weapons in its attacks against targets during its month-long war in Lebanon this summer.

The chemical can be used in shells, missiles and grenades and causes horrific burning when it comes into contact with human flesh. White phosphorus (WP) weapons are not forbidden by international law, but some human rights groups believe they should be reclassified as chemical weapons and banned.

WP is used by armies for producing smoke screens and as an incendiary. The phosphorus ignites on contact with air and gives off a thick smoke. If the chemical touches skin, it will continue to burn until it reaches the bone unless deprived of oxygen.

and as always there are no winners in war ...

Hezbollah fired cluster bombs into civilian areas of northern Israel in the recent conflict, Human Rights Watch said on Thursday. The Lebanese Shia militia used two Chinese-made rockets for cluster strikes that hit the village of Mghar in Galilee on July 25, according to evidence gathered by the United States-based organisation.

Although Israel made extensive use of cluster weapons against Lebanon, this is the first independent confirmation that Hezbollah used the weapons.

and the biggest loser in the world is ... drumroll ... wilderness/nature

The most comprehensive map of endangered species and where they live has shown that 11% of birds, 24% of mammals and 33% of amphibians are at risk.

Threatened species are not clustered together, making it harder to target resources. So the current "silver bullet" approach to conservation -- which relies on protecting areas such as national parks which contain numerous threatened species -- is missing many endangered animals.

"In the past what we have essentially done is identify plots using one particular [group of organisms] and said, 'Right, this is where we should put our protected areas'," said Andrew Pullin, head of the Centre for Evidence Based Conservation at Birmingham University. "We may have put our protected areas in great places for mammals or birds but we may not have adequately covered areas that are hotspots for lesser-known groups." The original article is available to subscribers on Mail and Guardian.
Posted by Kim at 14:33 No comments: