Have to love the onion

WASHINGTON, DC— The American ground forces in Afghanistan will be aided by the immediate deployment of Marine Pfc. Tim Ekenberg of Camp Lejeune, NC.

A WWF meeting in Japan is trying to save the tuna from extinction.
Reuters reports that Japan was rocked in November 2006 by news that global quotas for Atlantic bluefin tuna will be cut by nearly 8 percent next year. Japan's quota for southern bluefin was halved the month before for the next five years as punishment for years of overfishing.

Experts say substantial catch reductions are needed for big-eyed and yellowfin tuna, both relatively inexpensive species that regularly appear on Japanese supermarket shelves, and whose price would rise considerably were catch limits imposed.

For me, the greatest tragedy regarding the tuna, is the conviction among human animals, that we can continue to "manage tuna stocks". We have driven this species to the brink and yet we still feel we have the right to "manage" their future.

Quotas, punishment for overfishing and stamping out illegal fishing are not going to save the tuna. The only way we can save tuna, salmon, dugongs, blue whales and polar bears is to live in harmony with nature. NOT at the expense of nature. We need to get out of our cars and walk. We need to eat less, waste less, buy less, share more, consume less, reuse more.

We need to purge ourselves from the misconception that we have to "grow the economy". We don't! And we cannot continue to grow the economy forever, because we live on a planet of limited resources. This means the economy too has a limited lifespan. The sooner the planetary economy crashes, the better it will be for the tuna, salmon, dugongs, blue whales and polar bears.

And believe it or not. The better it will be for us too. Human and non-human people will all benefit from the end of the economy, the end of development, the end of "progress".

Enjoy your tuna salad and sushi while you can, because it's not going to be available for much longer. Our greed is wiping out yet another incredible non-human animal. When will we stop?
Posted by Kim at 08:51 No comments:

It's happened, South Africa's power supply shortage hit today ... big time. I just ran out at lunchtime to buy some tofu and encountered non-functional traffic lights, long queues, and a supermarket with darkened aisles, defrosting freezers and tills running off a diesel generator.

My favourite comment of the day, as I left the supermarket, was from a west african diplomat who was complaining that she couldn't slice the loaf of bread she had just bought.

What have we come to, that we no longer remember how to slice bread with a breadknife?

Anyway, the next week is going to be fun, as our power monolith eskom warns of regular blackouts while the tripped turbine at koeberg power station is fixed. How I wish the whole place had tripped permanently.
Posted by Kim at 01:50 No comments:

Doomsday clock about to be moved 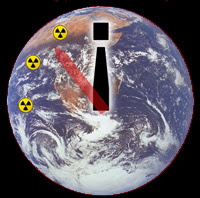 The keepers of the famous doomsday clock are about to move its hands again ... and all indications are that it is heading closer to midnight. In other words we are once again edging towards global catastrophe.

The Bulletin of Atomic Scientists, say the hands will be moved on Wednesday this week, to reflect "worsening nuclear and climate threats to the world".

The symbolic clock, maintained since 1947, is currently set at seven minutes to midnight, with midnight marking global catastrophe. The clock is kept at the University of Chicago. Watch this space ...
Posted by Kim at 08:52 No comments:

AT LAST! According to a news report on the Mail and Guardian website, Spanish bullfighting is

slowly bleeding to death. "Most people cannot imagine Spain without bullfights, but there are growing signs that the country's centuries-old fiesta nacional (national celebration) is on the decline. Not only are young people losing interest in the glittering and bloody spectacle, but even some of the authorities are beginning to feel embarrassed about this 'art'."

My pic of the day, taken early this morning on the front stoep when Barberton daisies and baby

grasshoppers welcomed me to a beautiful new day. I saw a bunch of little green things on the flower and took a closer look, expecting to see aphids or something and then I realised they were minute baby hoppers, surely newborn.

I wonder who has taken those little bites out of the petals?

And just look at the naughtly look in the eye of the little one sitting right in the middle of the bloom! [Click on the pic for a higher resolution version of the image, where you can see the glint in her eye.]
Posted by Kim at 11:47 No comments:

Back to the coal face 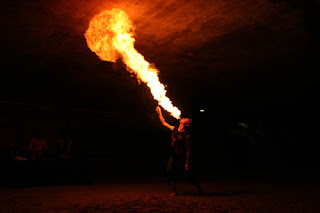 The holiday season has been a time of reflection, staying at home, taking long walks in the veld, ignoring computers and trying to stay away from the media [not always possible]. I enjoyed the summer solstice, which ended with a beautiful midsummer sunset. I spent a lot of time immersed in nature and managed to get my hands and feet covered in earth a couple of times, while working in the garden.

The image above was taken by me, just before the December break, but thought it matched the theme of today's post rather well.

I also had a close encounter with a deadly succulent. [Don't ever break off a branch of Euphorbia Ingens, the plant is toxic! I spent about 15 hours in agony, after its milky latex squirted into my right eye, burning the inside of my eyelid and temporarily blinding me. It was a scary moment. Don't mess with plants!!!]

But now I am rested and ready to face the challenges of our crumbling civilization, as it hopefully enters the death throes of its destructive existence.

I have started a journey to seek like-minded people in my immediate surroundings. After spending much time in cyberspace, with some amazing, inspirational eco-anarchists who are based all around the world, I have learned much. But I have realised it's important to connect with local people too. If one is to take any effective action in changing the world, one has to start locally. And one needs to do so in a team, as part of a community. This is my focus for the next period in my life.

Speaking of seeking community, I have stumbled across a group of people who are mainly based in the nearby city of Jozi. They are centred around a vegan restaurant which holds regular movie nights, showing alternative films and documentaries. Through this group I have seen the launch of a web forum which may just be a good place to seek community: www.vegansociety.co.za. Let's see what comes of this. Go and check it out, and join in the discussions!
Posted by Kim at 00:03 No comments: