"Nothing describes the needs and motives of the present industrial empire so well as the final rape-Antarctica. 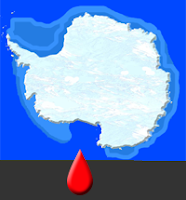 This beautiful and mysterious land is literally the end of the world. It is the south end of the planet and it is the last piece of the planet that has not been plundered by the culture of empire."

Antarctica: Empire at the End of the World by William Kötke

Like the rest of the planet, Antarctica is dying. Reuters last week reported that the Southern Ocean around Antarctica is so loaded with carbon dioxide that it can barely absorb any more, so increasing amounts of the gas will stay in the atmosphere to warm up the planet. Researchers confirm that human activity is the main culprit.

The relatively small Southern Ocean accounts for a whopping 20% of marine photosynthesis and plays a pivotal role in deep-ocean water circulation. Antarctic deep-ocean water carries nutrients which feed billions of creatures across the planet. For example:
And now the hunt is on across the landmass of Antarctica for scarce resources ie oil and gas! Increasing overwintering human populations and hordes of camera carrying summertime tourists, are a threat to the Antarctic environment. A number of countries have had oil exploration teams and programs in Antarctica. If oil production begins, Antarctica will be finished.

As Kötke says, "That the industrial predators are preparing to dismember the Antarctic is plain.

"The most serious threats at the present are krill fishing, whaling, sealing, oil drilling and mining.

"Krill fishing has been commenced by Japan and the former USSR. Other countries are testing products made with the krill to try to find ways to make money from it. The life habits of krill are quite complex and little is known about them and little is known about the whole complex of krill and krill eaters. Nonetheless, the industrialists have charged ahead. Harvesting the krill could have serious effects. The nearly extinct whale species need it to revive their numbers and other krill feeders depend on it.

"There are pirate whalers who have connections with the Japanese fishing fleets in the area who are still killing the nearly extinct large whales. The large scale whalers of recent years, the Russians and the Japanese, are taking minke whale in the area but have not killed the endangered fin, blue, humpback or southern right whales as far as is known. Because of the expense of operating in Antarctica, exploiting the area is to a great extent dependent upon how desperate countries become for protein, minerals and oil. As ecological catastrophes and exhaustion of resources progress outside Antarctica, the likelihood of industrial exploitation of Antarctic increases.

"The approach of the industrial countries to Antarctica demonstrates that the essential dynamics of empire culture have not changed since the time of the Sumerians. The motive of immediate gain continues to take precedence over all other values.
Posted by Kim at 10:41