We were talking about the recent CITES decision to allow four countries to trade in stocked ivory once again. Moongirl mentioned that she'd never thought about how they processed culled animals before. 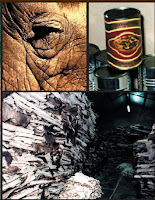 I mentioned the old Skukuza abattoir, tinned elephant meat and stories I'd heard when writing for the veterinary industry some years ago.

So I went surfing to see if I could find a pic of tinned elephant meat and ... yes I did (see image on the top right of this entry). I also found and astounding piece from the 1969-1970 Kruger National Park annual report where they boast about the over 500 000 kg of elephant meat "processed" in that year! This is too good to be true, let me quote verbatim:

"At the Skukuza Abattoir and By-products Plant in the Kruger National Park game carcases are processed. Fresh meat is supplied to the Park restaurants, sold to Park employees or used as rations for Bantu labourers. Biltong and dried sausage is produced for sale. Material not fit for human consumption is converted into bone or carcase meal."

Ugh, repulsive. But have things really changed? We're still trading in ivory, and in addition, now we are capturing wild elephant calves, beating them into submission, so that we can make money from tourists who are willing to ride on their backs. Elephant-back safaris are crass. How can they turn such a proud and magnificent animal into a beast of burden?

NEWSFLASH: ONLY CRETINS AND PRICKS RIDE ON ELEPHANTS!
Posted by Kim at 09:55 No comments:

I don't do long distance travel. Flying at bullet-like speeds freaks me out. I don't believe we were ever meant to physically travel at those speeds and at those heights. I feel like the cows and bulls must do when loaded into cattle trucks, ie squashed and claustraphobic, except my destination is not an abattoir!

So needless to say, I've never been to Bhutan.

But I have watched Michael Palin's epic series Himalaya. In the last episode he travels through beautiful, mountainous, environmentally-aware Bhutan. And I thought to myself, thank god there is one place on earth which is safe for now.

And yesterday my fantasy was shattered. Here's the reuters release that shook me:

GOMTU, Bhutan - As an explosion booms across the mountains, Yeshey Drukpa, 60, clenches his fist in anger standing in the foothills.

"The abode of the gods is being destroyed," he says, pointing towards billowing smoke above.

Mineral mining in Bhutan, a country that prides itself on its environmentally friendly policies, is not only angering some locals. It is also damaging agriculture and killing wildlife in neighbouring India, Indian officials said.

The Pugli hills around Gomtu, an industrial town in southwest Bhutan, are being blasted to extract dolomite, a mineral used both in steel manufacturing and in horticulture.

Just across the Indian border are the famed tea plantations of West Bengal state, the home of Darjeeling tea. Landslides and erosion caused by mining have left at least 14 estates prone to flooding, the Indian Tea Association says.

Former King Jigme Singye Wangchuck made protection of Bhutan's rich environment a cornerstone of the country's philosophy of Gross National Happiness. A quarter of Bhutan is set aside as national parks or wildlife sanctuaries. Nearly three-quarters is still forested.

In the final episode of Himalaya Palin demonstrates how Bhutan and Bangladesh are some 40 km apart, yet they could scarcely be more different. One is entirely composed of mountains, the other flat as a pancake. One is among the least crowded countries in the world, the other the most densely packed.

Bhutan's seclusion and stability is due largely to the physical inaccessibility of the Himalayan mountains.

I will spend a special moment today holding space for Bhutan before I do so for the elephants.

The large sea mammals will be the first to go

It's a guess, but I'm thinking the large marine mammals will be the first to go.

"So Long, and Thanks for All the Fish (1984, ISBN 0-345-39183-7) is the fourth book of the Hitchhiker's Guide to the Galaxy series written by Douglas Adams. Its title is the message left by the dolphins when they departed Planet Earth just before it was demolished to make way for a hyperspatial express route, as described in The Hitchhiker's Guide to the Galaxy." - wikipedia

Anyway, I think things might pan out differently because it seems the dolphins will be wiped out before the endgame. This is sad.

The U.S. and Japanese governments are planning to destroy the best remaining habitat of a unique and critically endangered marine mammal — the Okinawa dugong. This dugong, a relative of the manatee, is a rare marine mammal that feeds in the seagrass beds and coral reefs of Okinawa's Henoko Bay. Fewer than 50 individual dugongs remain in an area described by the United Nations Environment Programme as "the most important known dugong habitat in Japan." If the U.S. military proceeds with its Camp Scwab construction plan this exceptional, rare animal will lose the best habitat it has left and begin its last slide toward extinction.

Camp Schwab is located adjacent to and in Henoko Bay, and for years nonviolent citizens' groups, led primarily by community elders, have peacefully blocked U.S. military expansion efforts there. But now, the likelihood of Camp Schwab's expansion looms ever larger. On May 18, 2007, Henoko community members took to their kayaks and canoes to protest against private, pre-construction drilling surveys in Henoko Bay. In response to this peaceful demonstration, the Japanese Coast Guard was called in to deter citizen demonstrators. Unfortunately, the approaching completion of some drilling surveys brings expansion of Camp Schwab ever nearer.

Several organisations and Okinawan individuals have filed a lawsuit in federal district court in San Francisco against the U.S. Department of Defense base expansion plan. Environmental law firm Earthjustice represents the plaintiffs. The case will go to trial in September 2007.
Posted by Kim at 08:56 No comments: