Nike does the right thing for a change

Michael Vick is a big man. He's a hero to many. He is such a big, strong man that he gets off on dogfighting. Then, as recent allegations claim, he leaves the battered animals to die.

You love to glorify these bullies don't you?

The indictment against him claims that the dogfighting ring allegedly financed by Vick "executed underperforming dogs by drowning, hanging, shooting, electrocution and other brutal means".

Michael Vick is the American-fucking-dream. He is an Atlanta Falcons quarterback. A TRUE HERO. An empire-style, modern day gladiator in the arena of the National Football League.

It was with elation and much surprise that I learned this morning that Nike has actually done the right thing and suspended Michael Vick's contract without pay, and will not sell any more Michael Vick product at Nike-owned retail at this time.

This is surely a victory for animal rights. Once again the outcry was led by PETA who with its supporters put immense pressure on Nike to stop supporting the bully pending the outcome of this case.

So, get your thumb out of your butts and support PETA, support IFAW, support Sea Shepherd, support Uncaged. Stop watching TV and start doing something about the sorry state of this planet!
Posted by Kim at 09:33 No comments: Links to this post

Phillip Matthysen, 31, who beheaded his Husky puppy with a chainsaw, has had his sentence suspended in full.

According to Beeld newspaper, Matthysen, a marketing consultant from Sundra admitted in a packed court that he had committed the gruesome "murder" and said through his lawyer that he had sawn the dog's head off with the petrol-driven chainsaw in a fit of anger. Matthysen committed the crime in February after his four-month-old pup chewed through a cable running to his security fencing, and killed an exotic parrot.

But this man calmly walked to his chainsaw, filled it with petrol and asked his accomplice to hold down the puppy. This seems quite a premeditated procedure to me?

Nevertheless, although Matthyusen was sentenced to 12 months in prison or a fine of R10 000, the full sentence was conditionally suspended for five years.

If you, like me, are outraged at this, visit one of the following amazing South African websites and get involved in animal justice today:

Posted by Kim at 03:15 No comments: Links to this post

Every time we travelled around the countryside with Peppa, we would record an image of her in a particular place. We have pics of Peppa in Kaapsehoop, Mpumalanga (see image to the right), Peppa in Paternoster and Peppa in Lambert's Bay on the Weskus. We have Peppa in Port Edward, Peppa in Bizana, Peppa in Canarvon. My favourite pics is Peppa in Strandfontein, with a big wave crashing behind her. It epitomises the mountain lion inside Peppa. Unfortunately I don't have a digital version of that image.

Now Peppa is in Paradise.

Rest in peace my little teacher. 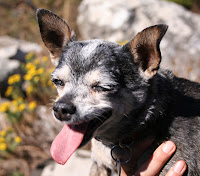 So it's time to say goodbye to Peppa and thank you. I know that TinTin and the others are there with you my little friend and may you soar.
Posted by Kim at 10:31 No comments: Links to this post