The GM Watch website is back after being shut down for nearly a week.

A Canadian Government bureaucrat succeeded in censoring the UK website which serves a global audience on the GM issue. But some say his goal went still further than that ...

The concern was over an expose of how a group of researchers deliberately skewed research to favour GM corn.

Here's the article they didn't want you to read:

[Go to the web page to see the photo of the "Would you eat wormy sweet corn?" sign]

The British Food Journal's Award for Excellence for Most Outstanding Paper in 2004 went to research that should never have been published. What the reviewers mistook for an impressive piece of scientific enquiry was a carefully crafted propaganda exercise that could only have one outcome. Both the award and the paper now need to be retracted.
***
Since this article was published a leading researcher into scientific ethics has called for the paper to be retracted.

***
It was late September 1999. The scene was a news conference outside a Loblaws grocery store in downtown Toronto. Greenpeace and the Council of Canadians were launching a public awareness campaign urging customers to ask the chain to remove all genetically modified foods from their shelves.

"The food is safe," shouted someone on the edge of the crowd. Jeff Wilson, who farms about 250 hectares northwest of Toronto, was part of a small group of hecklers. He had come to the store with Jim Fischer, the head of a lobby group called AgCare which supports GM foods. Doug Powell, an assistant professor at the University of Guelph, was also there.

And they had come prepared. Holding aloft a bug-ravaged cabbage, Wilson demanded, "Would you buy that?" Wilson claimed the cabbage could have been saved by genetic engineering.

According to a report in the Toronto Star, Doug Powell ended up in a shouting match with a shopper - 71-year old Evan John Evans, who told him, "I resent you putting stuff in my food I don't want."

A year later and Powell and Wilson's street theatrics had given way to a much more carefully choreographed exercise in persuading people that GM foods were what they wanted.

The scene this time was not Loblaws but Jeff Wilson's farm store, just outside the village of Hillsburgh. Here Powell and Wilson were running an experiment that had been conceived following the Loblaws encounter.

During summer 2000 Wilson grew both GM and conventional sweet corn on his farm. And following the first harvest in late August, both types of corn were put on sale amidst much publicity. The aim was to see which type would appeal most to Wilson's customers.

According to an award winning paper published in the British Food Journal, a sizeable majority opted to buy the GM corn. In the paper, authored by Wilson and Powell, and Powell's two research assistants - Katija Blaine and Shane Morris, the choice appears simple - the bins were "fully labeled" - either "genetically engineered Bt sweet corn" or "Regular sweet-corn". The only
other written information mentioned in the paper that might have influenced the preference of customers was lists of the chemicals used on each type of corn, and pamphlets "with background information on the project."

What Powell and his co-authors failed to report was that the information on the chemicals came with a variation on the bug-eaten cabbage stunt Wilson pulled outside Loblaws. There Wilson had demanded of shoppers "Would you buy that?" In Wilson's store the sign above the non-GM corn bin asked, "Would You Eat Wormy Sweet Corn?" Above the the Bt-corn bin, by contrast, the equivalent sign was headed: "Here's What Went into Producing Quality Sweet Corn".

Toronto Star reporter Stuart Laidlaw, who visited Wilson's farm several times during the research, says, "It is the only time I have seen a store label its own corn 'wormy'". In his book Secret Ingredients , Laidlaw includes a photograph of the "wormy" corn sign, and drily notes, "when one bin was marked 'wormy corn' and another 'quality sweet corn,' it was hardly
surprising which sold more."

Laidlaw also notes that any mention of the corn being labelled as "wormy" or "quality" was omitted in presentations and writings about the experiment. This is certainly the case with the paper in the British Food Journal. Yet the paper describes in some detail the care that the researchers took to avoid biasing consumer choice - by having, for example, both corn-bins kept
filled to the same level throughout the day; and by selling the two different types of corn for exactly the same amount. We are even told the precise purchase price: Cnd$3.99/dozen.

The emotively worded signs are not the only instance of glaring experimenter bias that went unmentioned in the award winning paper. During his visits to the store, Laidlaw noted that an information table contained, as well as press releases and pamphlets on the experiments, a number of pro-GM fact sheets - some authored by industry lobby groups, but no balancing
information from critics of genetic engineering.

And the bias didn't stop there. The lead researcher, Doug Powell, actually demonstrated to the journalist his ability to influence customer responses to questions about Bt corn and their future purchasing preferences. Laidlaw describes how when a customer who'd bought non-Bt corn was walking to his truck, "Powell talked to him about Bt corn - describing how it did not need insecticides because it produced its own and that it had been approved as safe by the federal government. Powell then told me I should talk to the man again. I did, and he said he would buy GM corn the next time he was at the store. Powell stood nearby with his arms crossed and a smile on his face."


Outside Loblaws the previous Fall, Powell had ended up in an unsuccessful slanging match. Now Powell and his associates had engineered a setting in which customer responses could be influenced far more successfully. Seeing Powell in action convinced Laidlaw that the only conclusion which could safely be drawn from these "experiments" was that, "fed a lot of pro-biotech sales pitches, shoppers could be convinced to buy GM products."

But none of the "pro-biotech sales pitches" made their way into the paper for which Powell and his associates were commended. Instead, research that was little more than pro-GM propaganda was presented as providing a meticulous scientific evaluation of consumer purchasing preferences.

The words of the day 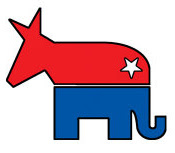 Posted by Kim at 10:44 No comments: Links to this post

You eat veal, you are a torturer of babes

The American Veal Association Pledges to End Cruel Confinement
The AVA announced a historic decision to phase out the practice of chaining calves by their necks inside solitary crates by 2017. Read more at PETA about the significance of this decision and what it means for calves and consumers.

Oh how enlightened (sic) of the AVA. They are giving themselves another 10 years to torture calves.

Calves are chained and kept virtually immobile in crates in order to ensure their flash remains tender.

The veal industry would not exist without the dairy industry's need to dispose of unwanted calves—by consuming dairy products, you're supporting veal factory farms.
Posted by Kim at 02:39 No comments: Links to this post