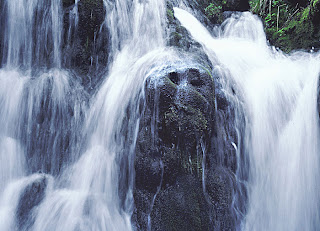 Beware the trolls, for they have magical powers and even when they have been turned to stone, they may still send a shiver down your spine!

"In one Swedish changeling tale, the troll child grows up at a farm while the human child grows up among the trolls. Everyone advises the human mother to brutalize the changeling so that the trolls would change children once more. However, the woman refuses to treat the innocent but maladapted troll child cruelly and persists in treating it as if it were her own. Eventually, the husband decides to leave his wife, as he can no longer support living with the troll child. His distraught wife allows him to leave her, because she can not abandon an innocent child, although it is a troll. When the husband has walked a distance into the forest, he meets his own son who tells him that he is free from the trolls. Every time someone tried to be cruel to the troll, his troll mother was about to treat the human child in the same manner, but when his mother sacrificed what was dearest to her, her husband, the trolls realized that they had no power over her and had to release the human child." enwikipedia
Posted by Kim at 09:43