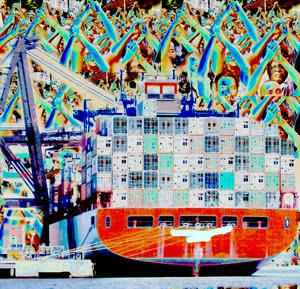 South African dockers are doing their bit to show solidarity with the people of Gaza, by refusing to unload an Israeli ship in Durban harbour. The ship later quietly left Durban harbour, and according to the APRS tracking database, the Johanna Russ (the ship in question) is now off the coast near Richards Bay.

Guess they're gonna try their luck at RBay?

Anyway, I think it's good to speak up when abuse takes place and what happened in Gaza recently was not a fair battle, but a massacre. A massacre of poor people who've had their olive trees cut down, their fuel, water and food supplies tampered with, and their human rights violated.

So, I say well done dock workers of eThekwini. Well done for speaking up!

South Africa-Palestine: Victory for Worker Solidarity
Anarkismo.net -
The Johanna Russ, flying an Antigua flag, is owned by M. Dizengoff and Co., an established "pioneer of the modern era of shipping business in the Middle ...
The Tale of Two Apartheids

Ship evades protesters
Independent Online, South Africa -
The Johanna Russ was expected to dock on Sunday and the Cosatu-aligned South African Transport and Allied Workers' Union had pledged not to offload the ship ...
Posted by Kim at 11:57 No comments: Links to this post

Environmentalist Sentenced to 21 Years as a “Terrorist”; Violent Racists Receive Half That

Marie Mason, a longtime environmental activist and mother of two, was sentenced this afternoon to 21 years in prison, as a “terrorist,” for non-violent property crimes in the name of defending the environment. It’s a historic sentence, the longest yet for any of these Green Scare cases. Read more ...

... and fellow south africans if you think our fast-becoming fascist state is any different ... think again!

the insane crime levels in south africa are being used to introduce more and more draconian measures, the police are being given more liberty to use violence against suspects and violence is becoming a vicious cycle.

btw it's interesting to note that the friends of jz website also refers to niemoller's poem, implying that "they" are out to get him. wonder who he thinks is out to get him? I thought he got rid of mbeki, pikoli and ngcuka. is there any opposition left within the anc?
Posted by Kim at 15:44 No comments: Links to this post

Khwezi has written a poem published in the Dutch magazine - Zam. The poem is called "I am khanga".

Khwezi is the woman who accused ANC leader Jacob Zuma of rape. After the trial, when Zuma was found not-guilty by the courts, his supporters hounded her out of the country. She sought and was granted exile in the Netherlands.

I am unable to find a direct link to the poem in the magazine (I think the contents of the latest issue are not yet available online). Fellow blogger - Kameraad Mhambi - has however provided the words of the poem here.

It makes for interesting reading. Please go and have a look, read and debate. Oh the poem is available on the AFRICA IS A COUNTRY blog site too.

If you work, you cannot dream

"My Young men shall never work. Men who work cannot dream; and wisdom comes to us in dreams. You ask me to plow the ground. Shall I take a knife and tear my mother's breast? Then when I die she will not take me to her bosom to rest. You ask me to dig for stone. Shall I dig under her skin for her bones? Then when I die I cannot enter her body to be born again. You ask me to cut grass and make hay and sell it and be rich like white men. But how dare I cut off my mother's hair?" - Chief Joseph of the Nez Perce
Posted by Kim at 10:36 4 comments: Links to this post