Canadian ecosocialist Ian Angus has a thought-provoking piece in the international journal of social justice, about the future course for their movement. 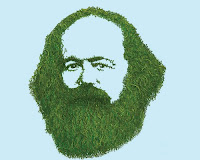 It's definitely worth reading and much of my personal processes are reflected, especially as a long-term environmentalist who has moved towards more radical alternatives to saving the planet, because the ballot box and lifestylism are not going to cut it.

I would love to see the emergence of a global mass movement against climate change. But daily I remind myself that I have to take concrete actions as well, to ensure a future for diversity as the Earth struggles under the weight of feeding and supporting 7 billion humans.

This headline comes as no surprise. After all, wild animals and wilderness areas have no right to exist unless they serve humans. Right? WRONG! Sadly, this tragically flawed thinking is the opinion of most human animals.

However, praise must go to investigative eco-journalist Yolandi Groenewald who does a wonderful job ensuring stories about the needs of non-human animals, plants and landscapes do get some coverage in the media.

It seems a gang of "farmers" in Mpumalanga are quietly encroaching on one of South Africa's few remaining wild spaces, the Songimvelo game reserve, which also happens to be a plant biodiversity hot spot.

But who is going to bother protecting plants, if we can't even protect wild rhinos?

I quote from Yolandi's article: Mpumalanga Parks and Tourism Agency spokesperson Kholofelo Nkambule refused to comment on the matter "due to its sensitivity" and because "it is sub judice and subject to litigation". He said the agency's legal team is attending to Songimvelo. But agency sources said they are concerned that Songimvelo could cease to exist and that Mpumalanga Parks is not fighting hard enough for its survival.

Whose side are you on?

Interesting dynamics in the .za political landscape right now and these dynamics are reflected in the organisations coming out in support of the public service strike. In addition to the unions involved in the strike, such as PSA, NEHAWU, DENOSA, SAPTU, HOSPERSA, SAPU, POPCRU, SADNU, PAWUSA, SAOU, NATU etc, are many related unions and even some  ANC alliance partners.

I've decided a list of those supporting the strike would make for interesting reading.

Here they are:
Here's the ANC's opinion issued on 25 August 2010: "The ANC strongly appeals to all parties who are involved in the dispute within the public sector to scale down on the unhelpful rhetoric and inflammatory language used, as such do not bring parties closer to the resolution of the dispute but instead hardens attitudes on all sides."

It is up to each us to make up our own minds about this, but for me the big picture is significant. And that is the fact that the balance of power is shifting in South Africa right now. I foresee two possible outcomes: one is a split in the ANC and the second is a clampdown within the ANC to assert itself, hush any real opposition and ensure a future "one party state" of sorts. I just cannot see any real opposition coming from outside the ANC, it has to come from within and the signs are there that this is happening.

Little splinters like COPE will have no impact. It will have to be a larger split such as the SACP, COSATU and maybe some branches of ANCYL and even the ANCWL joining forces and walking away from the mother body. What happened to the Women's League by the way? I just never hear their voice anymore. It's like they've been silenced???

Either way, major change is coming and sooner than I thought.

History (short term history at that!) will tell if I am right or not.

I was traumatised to read that the mystical, shaded, gurgling, forested, deep-green, swirling, living (plants and rocks included), natural and very eerie Phiphidi Falls near Thohoyondau are under threat. 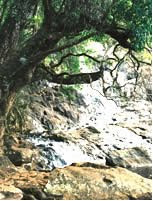 Having visited this mysterious site myself some years ago and heard the whispering of the water sprites, it is with sadness that I discover (thanks to African Alchemy) that the threat is coming from within the community. Some local leaders have gotten greedy and want to build ... horror of horrors ... tourist chalets and a b-b-bar UGH at this sacred site.

This is the site where for thousands of years women elders of the Ramunangi clan perform rituals to ensure rain and the protection the people and environment in the area.

That's what factory work does to you - it fries your brain

Foxconn gets the pompoms out to raise morale at 'suicide factory'
Young workers who normally spend their days assembling iPhones and other high-tech gadgets packed a stadium at their massive campus yesterday, waving pompoms and shouting slogans at a rally to raise morale following a string of suicides at the company's heavily regimented factories. The outreach to workers shows how the normally secretive Foxconn Technology Group has been shaken by the suicides – and the bad press they have drawn. Read more here: http://www.independent.co.uk/news/world/asia/foxconn-gets-the-pompoms-out-to-raise-morale-at-suicide-factory-2056320.html
Posted by Kim at 15:58 2 comments:

Long-time journo Peter Bruce has posted an item on his Business Day blog which features a speech made by Nelson Mandela in 1994 about, among other things, media freedom.

It is a good time to remind ourselves of the sacrifices that were made to fight for freedom during colonialism, during apartheid and other times of trouble. We should all prepare to be brave and speak out as we move into the next cycle of repression.

In fact, as with Khoe Chief Autshumato (‘Herrie the Strandloper’), his niece Kratoa, Nelson Mandela, Chris Hani, Ruth First, Lilian Ngoyi, Tecumseh, the Sisulus, Chief Xhore, Steve Biko and the slaves on the Amistad, we may need to do even more than just speaking out? But let's start there.
Posted by Kim at 13:55 No comments:

Opening the unlocked door of my cage

At this moment in time, everyone on this planet is in a perpetual state of suffering. Those who deny this are most likely watching a lot of television, and/or working 12-plus hours a day and/or taking lots of anti-depressants, alcohol, prozac or street drugs.

As this penny dropped, I decided to stop looking for the key and instead to simply open the unlocked door of my cage.

It was in this state of being - beyond hope, beyond pain, beyond innocence - that I knew I had to take action. Even if it meant dying in the process.
Posted by Kim at 15:31 No comments:

Labels: fighting back, my writing, poetry

Walking with the comrades - an essay by Arundhati Roy

Arundhati Roy is one of my heroes. I have only a few heroes, because not many people in the world today are brave. There are 7 billion of us, but few are truly brave. She is. She says all the things no one else is willing to say for fear of being assassinated.

More than that, she goes out into the world and takes action.

In February this year she went walking with a group of tribal Naxalites who live in the forests of India. These are people who are taking up arms to fight for their land which is being stolen by the state and multinationals who are after the mineral resources left in these remote areas. (Sound familiar?)

Some leftists have criticised Roy for being anti-Marxist and romantisising the tribal revolutionaries while ignoring the alternative future envisioned by the Marxists in India. They claim the tribals or adivasis have no future vision other than reclaiming their land. This is a load of crap. The role of tribal people in the coming revolution, and more importantly beyond, is constantly undervalued by modern leftists. It always despairs me (sic) to hear such nonsense, because it is divisive. When the enemy is so powerful and overwhelming as the machine that is devouring the planet right now, then all who oppose it need to stand together and tackle the common enemy. Once that enemy is out of the way, then one can start philosophising about how to move forward.

But right now the beast must be slain.

Read the amazing essay by Arundhati Roy, it is a life changer.
Posted by Kim at 22:29 No comments:

"This is why being silent in the face of oppression, tyranny, or the abuse of power by the state should not be considered an option by those of us committed to both democracy as well as freedoms of various sorts. Fortunately, democracy and liberty are often positively correlated, so that an increase in the one tends to coincide with an increase in the other." Jacques Rousseau, thedailymaverick

Read this great opinion piece here: It’s silly to take a penknife to a gunfight.
Posted by Kim at 14:20 No comments:

Doctors and parents in China are blaming formula from a New Zealand dairy conglomerate for the development of breasts in baby girls aged between four and 15 months, who have tested at hormone levels exceeding those of grown women.

When will people learn that factory farming of animals and treating animals like machines is going to bite them in the bum? You cannot get away with abusing animals and the environment without it impacting on human animals too. It's inevitable.

Read the article here.
Posted by Kim at 13:11 No comments:

Baby steps as we return to a fascist state

I am young enough to see through bullshit and old enough to remember the censorship and bullying tactics of the apartheid state. Bluntly put, I REMEMBER WHAT IT'S LIKE TO LIVE IN A FASCIST STATE.

So recent political shenanigans in this country and particularly events of the last 24 hours in South Africa have me very worried. As of today, journalists can be arrested without being charged, plucked off the street and spirited off to an undisclosed location.

It is terrifying when the colonised become the coloniser ... or at the very least adopt the horrible mindset of the very people who dominated and abused them. How do we break this cycle?

The ANC is leading this country towards fascism and we the people must once again rise up and fight against this with all our might.

One should never give the state too much power. There must always be checks and balances. Fellow South Africans, wake up and get involved!

Read the article in today's Daily Maverick titled:
then go away and think about what you are going to do to change this situation and to fight for democracy, fight for the people, fight for the landbase, fight for the future generations.
It is a sad irony that this happens the very same day that a wonderful initiative like:
LeadSA is an initiative to grow our spirit of unity and respect for one another. It "aims to to remind us that it is in our power to change ourselves and our country, that we all have the ability to lead. It's up to you to Stand Up for South Africa and our future."

On second thoughts, maybe it's not a sad irony but a wonderful coincidence that we now have the opportunity to channel our anger over the journalist's arrest, the corruption and greed etc into something positive, where we can make a difference and STOP THE ROT.
Posted by Kim at 15:28 No comments: